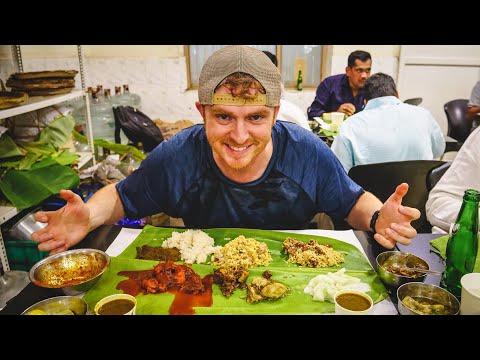 Hey guys, Sam here with another India travel video and in today’s episode, we’ll be going on a mouth-watering Bangalore food tour where we try South Indian cuisine including puri, dosa, idli, vada and banana leaf biryani! After saying farewell to Amritsar, David and I hopped on an overnight flight and travelled down to Bangalore! Here we met up with Anashwara, who kindly offered to show us some of the best places to eat in Bangalore. Together we explored the Ghandi Fruit and Flower Market, had vada and dosas for breakfast, wandered around Bangalore Fort and the Tipu Sultan’s Summer Palace, and feasted on some incredible biryani and curries served on a banana leaf. David's channel: https://www.youtube.com/user/Davidsbeenhere Follow Anashwara: (https://www.instagram.com/anashwara.m/) It was a fun first day in the city exploring some of Bangalore’s top attractions and sampling some of the local cuisine. Now let’s dive right in to our Bangalore food tour! The first restaurant we ate at was Vidyarthi Bhavan and their breakfast was legendary! We wanted to sample a mix of typical South Indian breakfast items so we got: a large puri with aloo, which is potato curry paired with a spicy chutney; idly, a savoury rice cake that was floating in sambar; vada, a savoury fried donut also accompanied by sambar; and two types of semolina, kara bath which was spicy and kesari bath which was sweet. Then it was time for the main event: dosas! Dosa is a rice pancake that originates in the south of India. The dosa at this restaurant was thicker from other ones I’ve tried before and it reminded me of a fluffy pancake. It was very crispy and golden on the outside, but soft and spongy in the interior. It was stuffed with a potato mash, and there was lots of chutney and sambar for dipping. BANGALORE FOOD TOUR! South Indian Cuisine (DOSA + VADA + PURI + IDLY + BIRYANI) in Bengaluru, India: After the dosas, we also got some typical Karnataka filter coffee. It was very milky, frothy and a lot of fun to pour! We needed to walk off that massive South Indian breakfast, so after that feast of a meal, we made our way to Bangalore Fort. Today, the fort's Delhi gate and the two bastions are all that really remains, so it is small but still very interesting to visit. Admission was free of charge. After visiting Bangalore Fort, we walked down the street to the nearby Tipu Sultan’s Summer Palace. This palace was the summer residence of Tipu Sultan, and it’s an impressive structure built entirely of teak and adorned with pillars, arches and balconies. It’s super close to the fort and definitely worth visiting if you’re travelling in Bangalore. Next up, it was time for lunch! We hopped in an Uber and drove to the Shivaji Military Hotel. Don’t let the name fool you! This is in fact a restaurant, and it is best known for its biryani. The food here was served on a banana leaf and we got to try a mix of biryani as well as different curries all varying in their level of spice. We were served liver, chicken dry, mutton dry, green chilli chicken, a cucumber yogurt salad, mutton biryani, chicken biryani, and ghee rice, which is rice cooked in clarified butter. It was a lot of food and it was tasty! The perfect introduction to Bangalore. That’s a little taste of our first day eating our way through the city. We hope you enjoyed this Bangalore food tour featuring typical South Indian dishes. In the next episode, we’ll be taking you on a nighttime street food tour, so stay tuned for more tasty adventures! * * * * * * * * * * * * GEAR WE USE Panasonic GH5: http://amzn.to/2yqTUyi Canon G7X ii: http://amzn.to/2yqtM6B Rode Video Micro: http://amzn.to/2wTguTM Joby Gorilla Pod: http://amzn.to/1PgoY5F SanDisk 16GB Extreme Pro: http://amzn.to/25KEErs * * * * * * * * * * * * SOCIAL MEDIA & TRAVEL BLOGS AUDREY: blog: http://thatbackpacker.com/ instagram: https://www.instagram.com/thatbackpacker/ facebook: https://www.facebook.com/thatbackpacker twitter: https://twitter.com/ThatBackpacker SAMUEL: blog: http://nomadicsamuel.com/ facebook: https://www.facebook.com/nomadicsamuel twitter: https://twitter.com/NomadicSamuel instagram: https://www.instagram.com/nomadicsamuel/ * * * * * * * * * * * * Music We Use: http://bit.ly/SamAudreyMusic